There comes a time when you can try a version of a food for the thousandth time and still cannot decide if this is actually the way you like it the most. When you try this new take on it, it seems like you can always compare it or find somewhere where it was just as good. For me, I am always in search of the best version of the foods I love and when I find it, I become addicted and find myself coming back again and again to see if it holds up to the first time and leaves me with that same “wow” feeling.

To me, pizza is one of those foods that can be tweaked and contorted too many ways and be messed up on appearance and taste. A good slice of pizza starts with its looks. If it is a jumbled slice that does not have evenly spread toppings and cheese with grease pooling in certain spots, than the rendezvous ends abruptly. Also, I am a thin-crust guy (I know, I know, but the argument ends there with me. There will be no discussions or persuading me on this. I just don’t see the point to overwhelm a slice with all that bread). Anyway, carbs are out people! Get with it…thin’s in. The battle on this topic will rage on, but I won’t hear it!

When I first arrived in LA and began my restaraunt search, I heard hoots and hollerings about this certain pizza joint that serves up a great slice. Well, not just great but “the best in LA.” I knew I had to try this just because of the claim alone. I began to collect my info on this place and soon found out that it was one of the tougher reservations to get for lunch or dinner. This only led me to believe that this might be one of those “in” places where celebrities and so-called celebs have shown up and caused this reputation. Not the food though…at least that’s what I thought.

I had carefully planned out my method for getting a seat at this place (hint: I showed up between lunch and dinner…I am sneaky, I know, but you guys can have that tid bit. Just don’t everyone use it all at once or we we’ll create the same problem as lunch and dinner).

As I pulled up to the corner of Melrose and Highland (around 3 o’clock), I was pleased to see no line outside, so I decided to go for it and pulled up to the valet. He asked if I was here for Pizzeria Mozza and of course, I said that I was. I walked in and was pleased to see many open spots and was given a choice between a table or sitting at one of two bars. I chose the bar that surrounded the kitchen, as I wanted to see this operation up close. I was presented a menu and began my inspection of the place.

The menu has 15 or so pizzas ranging from squash blossom tomato sauce and burrata cheese (below) to the typical meatlovers of sausage, salami and prosciutto. I picked the one most resembling my favorite – the Fresno chili, salumi salami and mozzarella.

This isn’t your typical pizzeria…the apps are to die for and don’t disappoint.

But first up was the fried squash blossom stuffed with ricotta…one word – UNBELIEVABLE! This is one of those addicting foods that is a favorite of mine now. I will have to avoid this place in the offseason because of this dish alone!

Next up was Mussel al forno with Calabrian sauce and if you’re a mussel lover like me, then come for these. They rank up there in my top two spots to get mussels — the other being Tomaso’s in Phoenix but that’s another review.

Now to the pizza. It comes out of that oven piping hot and picture perfect. I could still hear the sizziling as it sat in front of me – that oh so good popping and crackling that teases you to try a bite. But, an experienced diner knows this will only ruin your meal because your taste buds and tongue will burn and make it a bittersweet meal. 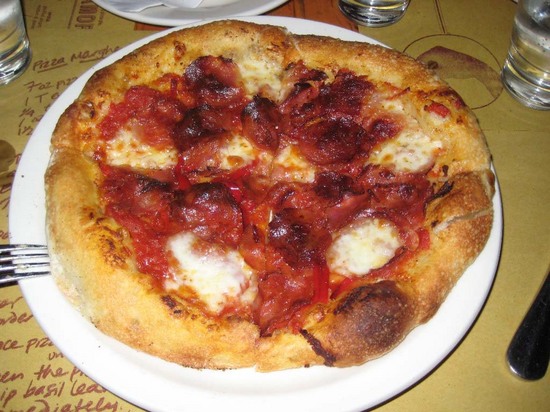 So I finally sank my teeth in and I began to analyze — it’s really good. Bite after bite, I experienced and discovered a new taste. The expectations that I had built up had gotten me wary but at the end of devouring the entire pizza, I was impressed by every bite, especially the crust which is very crunchy on the outside but chewy on the inside.

Well, if you can’t tell, I have really grown to love this place…like they say, love at first bite! It is not only a great pizza they serve up, but I have tried almost every appetizer and they are all great. It is definitely a must-visit when looking at your dining options in LA, so take my advice on this one and give it a try. Who knows, you might see me there…that’s how often I eat there now!